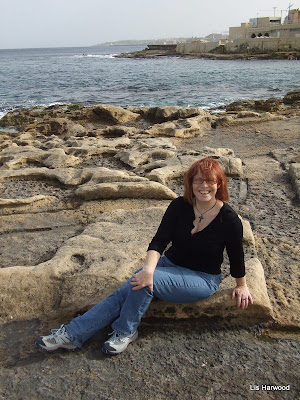 I'm just having a little break, be back soon.
Posted by Lis Harwood at 14:43 5 comments:

Why tofu? As far as I can work out it is probably because tofu is soft, so by laying the needles in tofu they are given a gentle resting place after all their hard work.

This festival derives from the cultural respect for the small and everyday objects.  Sometimes the resting place for the needles will be three tiers, the bottom containing other small sewing tools, the middle holding the tofu to receive the broken needles and the top containing sweets or baked goods as offerings.

Another idea I encountered while looking for information about this festival was the idea that as women sew they often think about their secret sorrows and hardships, and these thoughts go into their needles.  As they ceremonially lay the broken needles to rest, they may also lay these sorrows to rest.
This is an invitation to all of you to join me on Feb 8 in pausing for a little while to honor our broken needles and pins by doing something with them.
On Feb 8 take a bit of time to pause and reflect on the work and the pleasure all your different needles and pins give you, and join us in honoring these simple hardworking tools.
Here are some suggestions for how you might do that:
-make your own broken needle resting place with a block of firm tofu and decorations
-make a small applique or stitchery about (broken) needles, or collage with broken needles
-make a new needle case
-collect together and organize you pins and needles
-simply make an artistic photograph of your needles, pins, pincushions, needle cases...
Whatever you choose to do, take a photograph and email it to me. I will be posting the photographs here until the end of February. You can include a short sentence or two to accompany it.
For links to more about the Festival of Broken Needles go to Sashiko Stitchers and look for the links in the right sidebar.
I am, of course, hoping you will send me photographs to put on the sashiko stitchers site!  I will post them until the end of February.
Email them to either address
sue@aboutfuroshiki.com
susan@sashikostitchers.com
Added 7th February 2011 -
This is what I have done for hari-kuyo this year:
I lined a small box with a piece of wadding and then laid my needles and pins to rest on it, thanking them for the work they have done and what they have helped me create during the past year. 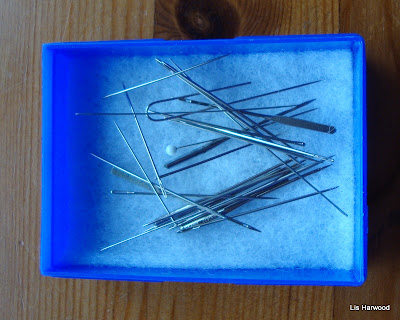 I made a small quilt for the pins and needles and covered them with it. 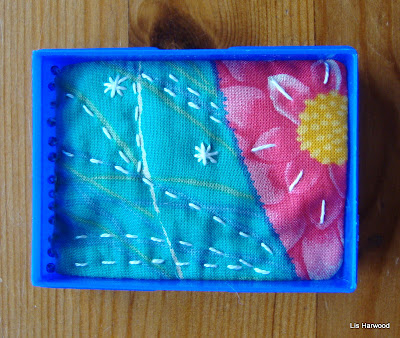 Finally I put the lid on the box and tied it with ribbon. 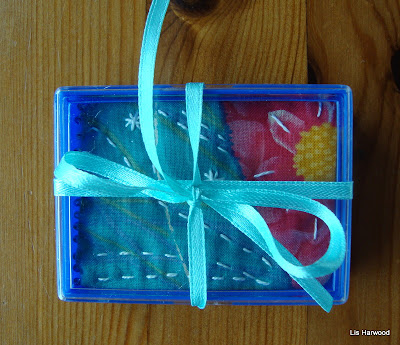 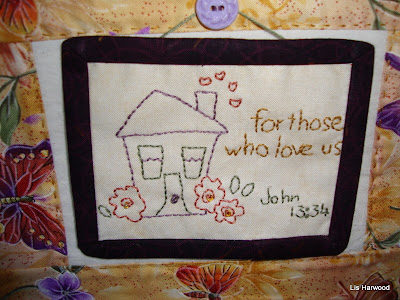 This is my first mini quilt for Jenny's "Give thanks" BOM wall hanging and today I am giving thanks that the prayers Jenny requested for north Queensland yesterday were answered and that, although there is terrible devastation, there was no loss of life when cyclone Yasi hit.
I haven't felt up to doing any sewing this week but did receive the last of the latest fabric postcards in the current swap I've been doing.  This is with BQLPC and is a lot of fun (and you don't have to do every swap).  The theme was "Inspired by ny favourite music" and these are the cards I was sent:

This is Pauline's beautiful interpretation of Rimsky-Korsakov's "Dragonflies" 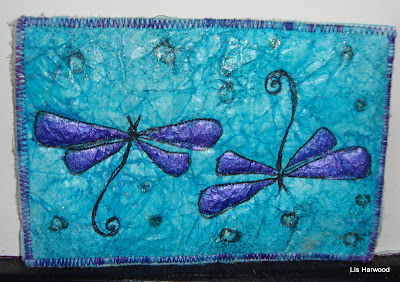 and Jacquie loves Mussorgsky's "Pictures at an Exhibition" 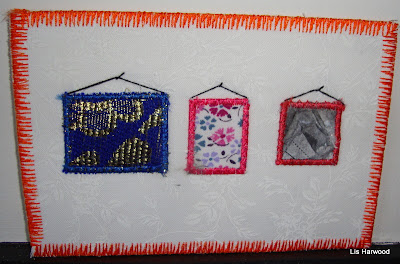 Janet's favourite, the Duet from "The Pearl Fishers" by Bizet inspired this delicate design 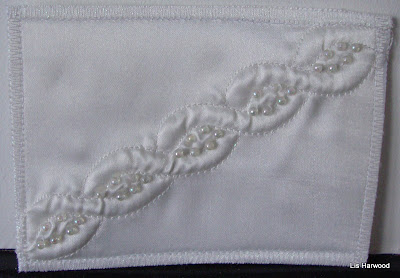 Two ladies decided to base their cards on a genre of music rather than a specific piece,
Jan loves jazz 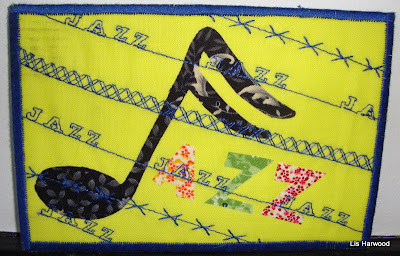 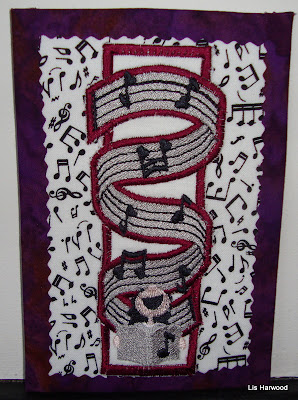 My cards for the swap were inspired by Holst's Planets Suite.  They were all slightly different but this is the one I kept for myself. 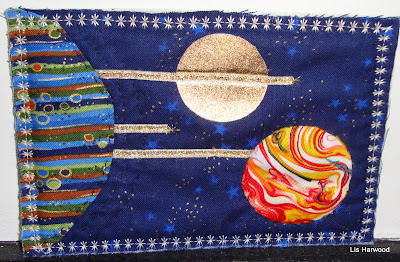 It is so exciting to wait for the postman when cards are due and to see how the themes have been interpreted.
Posted by Lis Harwood at 14:11 4 comments:

Lis Harwood
Lincolnshire, United Kingdom
In my prime (50 plus taxes), living a relaxed English city-based lifestyle with the option of escaping to a country cottage with my beloved. I have a particular enthusiasm for Japanese textiles and techniques and, after a very special trip to Japan in 2012, my stitching projects are becoming increasingly influenced by Japanese style. I try to ignore my chronic illnesses and eat mainly vegetables chopped up in my Thermomix to maintain my health and to fund my fabric and travel habits! I especially want to return to Japan and I hope to visit New Zealand again soon. I have two wonderful grown up children and two grandsons, one being the gorgeous Sam, who appears frequently on these pages.